Language in communication and translation, Philosophy

In several previous posts, I pondered on the literary theory of “deconstruction.” (See here and here). It was Jacques Derrida, the Jewish French philosopher (1930-2004, who coined the term “deconstruction.” The question is, “Is deconstruction merely a fancy term for “destruction” where, after digging beneath its archaeological sedimentations, all I find are etymological bones. 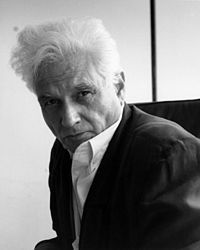 The discussion is divided into two parts: 1. What is deconstruction, and 2. Rules of language, which show up the weaknesses in deconstruction.

“Here or there, says Derrida, the French Jewish philosopher I have used the word deconstruction which has nothing to do with destruction. That is to say, it is simply a question of…being alert to the implications, to the historical sedimentations of the language which we use – and that is not destruction.

In Derrida’s deconstruction, language is the sediment of the desire to mean, to communicate, and has no locatable centre nor retrievable origin; its existence is a network of differences between signifiers (sounds or written symbols signifying meaning), each tracing, tracking, leaping over the other, where the story of reality consists in nothing more more than pseudo-stable signs (signifiers and signifieds) chasing after one another’s enigmatic tales.

In deconstruction there is no necessary connection between the desire to signify (to mean) and the signifiers that evoke that desire.

“[I]f language is not inherently determined by a set of univocal (single) meanings, then language use, given an unlimited number of contexts over an indefinite period of time, becomes an unrestricted interaction of signifiers, the Nietzschean affirmation of free play without nostalgia for a “center” or for ‘origins’” (J. Derrida 1981, Dissemination. Translated by Barbara Johnson. London: Athlone, 278-93).

But surely, if you give a specific chunk of discourse an unlimited number of contexts, no communication is possible. For example, if it is true that language has no locatable centre, and all is free play, I would be free to allocate any meaning I desire to Derrida’s paragraph above, and in so doing bury myself in nostalgia for the time when language was not an “unrestricted interaction of signifiers,” but I should, advises Derrida, not pull my syntactic sinews and semantic flesh together, for to do so will only result in the return (nostos) of suffering (algos).

This kind of linguistic free play is linguistic foul play. I say this because, all deconstructionists are at bottom constructivists. A constructivist believes that knowledge is not discovered but constructed. In other words, reality is not  “given” (existing out there), but  “taken” (from your constructive imaginations).

Part 2 Rules of language and the weakness of deconstruction

Derrida, however, insisted that you could only understand deconstruction if you obeyed the rules of grammar, rhetoric and pragmatics.

“What I, on the other hand, must recall to your attention – and I will remind you of it more than once – is that the text of an appeal obeys certain rules; it has its grammar, its rhetoric, its pragmatics. I’ll come back to this point in a moment, to wit: as you did not take these rules into account, you quite simply did not read my text, in the most elementary and quasi-grammatical sense of what is called reading.

The context of the above quotation is Derrida’s response to McClintock and Nixon [1986] whom he rebukes for misunderstanding the context in which he was using the term “apartheid” and for gross distortions, according to Derrida, of his theory of deconstruction. (McClintock, A. & Nixon, R. 1986. No Names Apart: The Separation of Word and History in Derrida’s ‘Le Dernier Mot du Racisme.’  [The lawst word in racism], Critical Enquiry, Autumn, pp.140-154).

Therefore, it is Derrida himself who insists that his writing obeys certain rules, the abuse of which leads to misreading his intentions. Accordingly, Derrida does believe in communication, i.e. codes that mean (Lawlor 1983; Scholes 1988). But for codes to mean, they must mean something particular, that is, they must be connected to a particular (specific) context – or contexts. Contexts can be plural but should, surely, never be unrestricted. Recall (above) Derrida’s description of “deconstruction” as an unrestricted interaction of signifiers, the Nietzschean affirmation of free play without nostalgia for a “center” or for ‘origins.’” Typology is an example of plural contexts; for example, from the Christian perspective, the exodus is an historical event in itself, and so it unfolds within a historical context, but the exodus also points to the believer in Jesus passing through the “waters” of regeneration (Catholics would say the literal waters of baptism).

Derrida cannot have his cake and eat it; he can’t have a communication, a message, a specific interpretation, and his free play at the same time. It goes without saying (it too much) that although interpretations are imperfect vessels of meaning, they nevertheless mean. (See my Tower Derrida’s Tower of Babel).

What are these rules of “grammar, rhetoric and pragmatics” to which Derrida refers? “Grammar” refers to how words are used in sentences, “rhetoric” refers to the art of discourse, which aims to improve language facility in speaking and writing in the the different functions of language such as transacting (providing) information and persuasion.

Now, when we say language means something, we mean at least two kinds of meaning: sentence meaning (what Geoffrey Leech calls “semantic meaning”) and meaning beyond the sentence (in linguistic terms, suprasentential, intersentential meaning). This intersentential meaning is called “pragmatic meaning” (Leech), that is, the way sentences are used in larger chunks of discourse (Language use). So, there is a difference between sentence meaning (semantic meaning) and the meaning of a discourse as a whole (pragmatic meaning).

The distinction between semantic and pragmatic meaning can also be explained in the following way (Leech 1983):

– the meaning of X, which is the semantic or sentence meaning,

what you mean by X, which is the pragmatic or sociolinguistic meaning.

The sentence “I am reading” means that there is somebody, namely me who is reading. This meaning is the semantic or sentence meaning.

We use “I am reading” in a life situation:

Here are a few possibilities of the pragmatic meaning of these two sentences, one a question, the other the answer to the question:

Question: “What are you doing?”

2. What a miracle, you’re reading a book!

3. We’ve been looking all over for you, and here you are all the time, rotting at your desk.

4. Who the blazes do you think you are to speak to me like that?

5. You illiterate idiot, go back to your comics.

So the pragmatic context of language does not merely go beyond the sentence meaning, it actually makes the sentence meaningful, and actual meaning (enacted in language use) is the only kind of meaning that we can live by. (See my Structure in Grammar and in Function: A Marginal Note).

Let us now return to the sentence we started with, namely, Derrida’s definition of deconstruction (keeping in mind that this definition is far from exhaustive).

“Here or there I have used the word deconstruction which has nothing to do with destruction. That is to say, it is simply a question of…being alert to the implications, to the historical sedimentations of the language which we use – and that is not destruction.”

Deconstruction, therefore, deals with the dregs of what language used to mean, while grammar, rhetoric and pragmatics deals with language use, what it means on this page.

And, unsurprisingly, there are no mistakes in deconstruction, because, reality is a taken, not a given; in other words, you construct your reality, and if you do so using the historical sedimentations of language as your foundation, you would be doing deconstruction. Here is an example, which, again unsurprisingly, originates in the confusion of tongues at Babel. The example is Derrida’s “mistaken” view of the origin of the very term “Babel.”

We read Derrida writing about reading Voltaire. Voltaire makes the following assumption about the etymology of “Babel”:

We follow Derrida following Voltaire. Derrida refers to Voltaire’s observation that Babel besides being a proper noun has, as a common noun, two further meanings, namely (1) disorder, and (2) perplexity, i.e. the perplexity which confronted the architects before the interrupted work. All these senses, he claims, became confused. This is so. But watch what happens.

We observe Derrida in his “Des Tours de Babel” imitating Voltaire’s interpretation of Babel as “father-God”. But Voltaire is wrong, for BEL has nothing to do with God; Babel derives from BAB-ILU and does not mean “father-God”, but “gate-God”.

(J. Derrida. 1985. The Tower of Babel. In: Graham, J.F. (ed. and Trans.). Difference in Translation . Ithaca: Cornell University Press. Here is another edition. The English translation“The Tower of Babel,” of the French “Des Tours de Babel” loses the play on words of “detour” and “des tours”).

What does Derrida’s “Des Tours de Babel” lose in taking the wrong detour? Not much is lost on the BA(B) because what Derrida considers to be the father seme does not disseminate into the remains of his tortured text. But it is the unbeautiful gate ILU, mistaken for BEL (God) which ties the rest of “Des Tours…” into an unsacred knot (p.203-4 of “Des Tours…”).

Towards the end of his detour in “Des tours…”, Derrida is upset in the saddle of his own interventions: an unstrategic spillage, displacing the displacement of his own pluralities. I’m reminded of Walter Brueggemann’s “pluriform” versions of the “big story”.  He gives the example of Mark’s Gospel. “Luke came along and said that’s (Brueggeman’s emphasis) not the way the story is put together and so from what I understand from New Testament scholars, he put it together very differently…there is a big story but it is profoundly pluriform.”

He gives the example of the “pluralism of our faith”: you’re a new pastor whose moved to town and you don’t know any of the families. A mother dies and and you ask the five daughters what their mother was like. You’ll get five contradictory stories where they’ll say “she wasn’t like that at all.” And you’re the pastor and have to weave that altogether. (My transcript of part of the Q&A session of the 2004 Emergent Theological Conversation with Walter Brueggemann. (The audio and the Brueggemann’s theses can be found here).

To return to Derrida. The law/lore of deconstruction imposed on the text sanctions (which can mean either “commands” or “forbids,” but in deconstruction means both! depending on which detour you want to take) Derrida to pass the gate off for God; ILU for (B)EL. The question is whether this disclosure of the sediments of repetition and reversal of gate and God weaken the foundations of deconstruction? On the contrary, it is these very fortuitous (strategic?) repetitions and reversals – every loss is always aGAIN – which make more explicit the hidden sedimentations of language.. I try and show why this is so:The gate re-opens (is it the same gate?), revealing a path (the same path?), a track, a trace, departing from the tower of Babylon and arriving at a stairway in Bethel. The stairway rests on the earth and reaches up to heaven. On the stairway, angels coruscate up and down. At the top of the ladder stands the God of Genesis; at the bottom, Jacob, the heEler of God; asleep:

Jacob awakes; filled with awe he bursts into worship and praise:

Surely the Lord is in this place, and I was not aware of it…How awesome is this place. This is none other than the house of God; this is the gate of God.

Jacob’s gate is the gate of El, while Jacques’ gate; well, that’s his BEL.

(For a fuller explanation of Derrida’s error see Babel: Can Derrida’s Tour (Surprisingly) Translate Us Anywhere?