Yesterday, while preparing for my debut public flamenco performance of the farruca – as accompaniment to my daughter, Rushka, I was watching Carlos Montoya’s hands shimmering through the farruca. I flashed back several decades to the “Space” theatre in Long Street Cape Town where I performed in a show called “Mollusc Mania” based on Gus Ferguson‘s book of poetry (1978) “Snail morning.” Gus and Jenny Pichanick were also in the show; Jenny directed, while I drekted.

Gus and Jenny recited most of the poetry, while I sang, played the guitar and also did a few poems, one with Jenny called “Gastropoda.” Jenny did the poem and I followed with a description of a flatulent inflated yiddishe snail Montgolfier;  ascending and “descanting,” through my descant recorder and the snail’s shfinkta.

But enough of versatile me and to the very talented Jenny Pichanick. She didn’t just recite the poems. It wasn’t merely a poetry reading. One of the poems was the mournful “Shellancolia,” which required many dramatic effects. Jenny was marvelous. 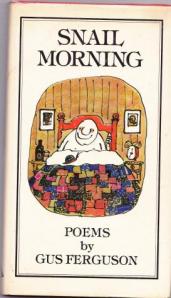 After the show, my sister Sonia – she is now in her eighties and lives in Highlands House, a Jewish retirement home in upper Cape Town – went up to Jenny and said: